Timothy Alexander Guzman, Global Research – Alistair Cooke, a British-born writer who became a BBC film critic early in his career who worked mainly in the United States as a journalist, television personality, radio broadcaster had expressed his honest point of view on Hollywood’s film industry when he said that “I believe that Hollywood is the most effective and disastrous propaganda factory there has ever been in the history of human beings.” Since World War II, Hollywood has been one of the main instruments of propaganda for globalist agendas. It began with US President, Franklin D. Roosevelt who established the US Office of War Information (OWI) from June 1942 until September 1945 whose job was to regulate newspapers, radio broadcasts, Hollywood films and all other forms of media in order to propagandize the public in an effort to gain support for America’s involvement in the war. The OWI launched a global propaganda campaign that oversaw revisions in collaboration with Hollywood producers, and at times, even rejected film scripts that portrayed the US as a negative force on the world stage.  The OWI’s main job was to reject any film that had anti-war material.  There was also the Bureau of Motion Pictures (BMP) which was a division under the OWI that worked with Hollywood executives to decide which movies could benefit the war effort, for example, it authorized several films that had anti-Japanese propaganda, sort of like todays anti-Russia propaganda you find in many Hollywood films. However, over the last 20 years or so, Hollywood propaganda has even become even worse with the help of its Hollywood celebrities who have become mouthpieces for globalist agendas, so let’s call them for what they really are, ‘Useful Idiots.’

It’s amazing that for the last couple of decades many Hollywood celebrities have become self-described experts and spokespeople for US wars, Big Pharma, climate change and other globalist agendas.  Hollywood celebrities act and sing for a living, wear expensive name-brand clothing, and in some cases exploit their children to be part of the new woke culture. The so-called “Hollywood activists” such as George Clooney, U2 lead singer Bono, and the rest of them are phony as they can be. However, in all fairness, there are a handful of celebrities who do not, in any way fall into that category including Mel Gibson who is outspoken critic on Jewish power in Hollywood, comedian and actor George Carlin (R.I.P.), Marlon Brando, John Lennon (R.I.P.) and a handful of others.  When it comes to Israeli occupation and genocide against the Palestinians, Javier Bardem, Penelope Cruz, singer-songwriter and composer Roger Waters, Natalie Portman, and actress Vanessa Redgrave come to mind. In 1978, Vanessa Redgrave won an Oscar for best supporting actress in the film ‘Julia’ gave an acceptance speech at the 50th Academy Awards which she denounced Israel’s war against the Palestinians.  Redgrave said that “a small bunch of Zionist hoodlums whose behavior is an insult to the stature of Jews all over the world.”  The British actress had claimed in the past that far-right Jewish Defense League targeted her for producing the 1977 documentary ‘The Palestinian’.

Most Hollywood celebrities who toe the line will do and say anything to remain relevant in the film and television industries, so they also follow the mainstream media narratives or listen to their Hollywood bosses, or maybe they are just dumbed-down individuals, just ask outspoken actor and comedian Ricky Gervais who had an iconic opening monologue in the Golden Globe awards ceremony in 2020 that will be remembered for the ages:

So, if you do win an award tonight, don’t use it as a platform to make a political speech. You’re in no position to lecture the public about anything. You know nothing about the real world. Most of you spent less time in school than Greta Thunberg.

So if you win, come up, accept your little award, thank your agent, and your God and fuck off, OK? It’s already three hours long. Right, let’s do the first award 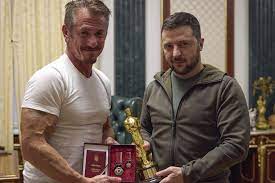 Although talented, two of the most idiotic actors in Hollywood when it comes to the war in Ukraine is Sean Penn and Ben Stiller.  Last month, Sean Penn recently visited and lent Ukrainian President Volodymyr Zelensky his Oscar while Zelensky awarded Penn the Order of Merit honor because he is “doing everything to help us gather international support” according to Reuters.  The article ‘Sean Penn visits Ukraine’s Zelensky, loans him an Oscar’ stated that “Hollywood actor and director Sean Penn, sanctioned by Russia for criticizing its war in Ukraine, loaned his Oscar statuette to Ukrainian President Volodymyr Zelenskiy during a visit to Kyiv on Tuesday.”

The other actor is Ben Stiller who played an idiotic model in Zoolander and many other films called Zelensky his hero.  According to NBC News ‘Ben Stiller meets with Zelenskyy in Kyiv, tells Ukrainian leader ‘You’re my hero’ said that “The comedy star praised the Ukrainian president — himself a former comedian and actor — as a hero during the meeting, telling him: “You’re amazing” and that “It’s a great honor for me,” Stiller, who was appointed a UNHCR goodwill ambassador in July 2018, said in video capturing the meeting. “It’s really wonderful, you’re my hero. You’re amazing.”  So Stiller jumps on the Zelensky bandwagon just like most of his Hollywood friends to help the Western narrative that the war in Ukraine is about “freedom and democracy.”

But I want to go back to Sean Penn and his incredible hypocrisy when it comes to US wars and regime change.  In 2011, US President Barack Obama and Hillary Clinton gave US forces and NATO the greenlight to remove Libyan President, Muammar Gaddafi from power which destroyed Libya in the process.  Here is the interview with Sean Penn on CNN on his claim that it was all Gaddafi’s fault:

Obviously, the war on Libya was run by the Democratic Party so for Penn it was justified.  Now here is Sean Penn questioning the Bush Administration on WMDs in Iraq on December 15th, 2002.  The war on Iraq was basically a Republican Party affair under the Bush neocons:

Sean Penn’s hypocrisy is clearly staggering. He is a total propagandist for the US war machine.  Although Sean Penn has supported Venezuela’s revolution and other causes such as the Haiti’s earthquake in 2010 where he founded the J/P Haitian Relief Organization which operated a 55,000 person tent camp for victims of the earthquake, he is still a mouthpiece for the Democratic party and any regime change operation they deem necessary, so it is fair to say that both, Sean Penn and Ben Stiller are useful idiots.

I am not going to get into the global lockdown and the dangers of the Covid-19 vaccine and the ridiculous enforcement of wearing facemasks or social distancing rules, so here are what several celebrities have posted on Instagram and twitter after they received their shots :

“Double vaxed + boosted…don’t 4get to still wear a mask this sh*ts contagious 💋☠️,

“Boosted for the holidays! 🎄🎅🏽🍷 Thankful for the miracle of science and medicine allowing me to be with my loved ones safely this year 🥰

“I’m a lucky man. Lucky to work alongside the ⁦@LAFD & our great frontline @CoreResponse staff, our partners at Carbon Health, USC, & Curative Lab,” he tweeted. “We test & vaccinate thousands per day. We need your support to get more people lucky. Text CORE to 707070 to donate.”

*Note: Sean Penn was interviewed by Yahoo Entertainment and said that “My deep belief personally, is that these [vaccines are] no different than having everybody being able to drive 100 miles an hour in a car” he continued “This is one of those things that should be mandatory. That we all get with the exception — the very few exceptions — for those people who, for whatever medical condition, might offset it, but I do think that vaccines need to be mandatory, and I do think that business — all businesses, the movie business, all businesses — need to take the lead and to be not so timid in dealing with their collective bargaining agreement partners.”

“All right, I just got my vaccine, and I would recommend it to anyone and everyone, come with me if you want to live.”

Despite all the evidence that the Covid-19 vaccines are dangerous and that wearing a facemask or social distancing does not work which brings me to the conclusion that these Hollywood celebrities are either brainwashed by the mainstream media, or they are just following the lies of Anthony Fauci who was elevated to celebrity status during the Covid-19 “pandemic”.  These people are not role models, they are just following what the medical establishment has prescribed to the public.  They are propagandizing the public to take Covid-19 killer shots which demonstrates that no one should listen to these people. Once you inject the MRNA technology into your body, its forever, its permanent and you cannot detox to get rid of it.  So in other words, don’t listen to these fools.

The Truth about Hollywood

There is no doubt that Hollywood has produced good films in the past but the Hollywood of today should focus on producing better movies and TV shows because most of their films are made only for propaganda purposes. In fact, many films today have no originality, better yet, there should be an alternative Hollywood that produces films without any form of propaganda that are worth watching. They can produce films that tells us real stories from around the world, like stories that come out of the Palestinian struggle or what is happening in certain parts of Africa as in the Hollywood movie ‘Blood Diamond’ with Leonardo DiCaprio and Djimon Hounsou that tells the story about the Diamond industry and its effects on the African people. Instead they produce propaganda films based on the US Military fighting for democracy or numerous films based on the Jewish Holocaust. When was the last time you saw a film based on the genocide of a Native American tribe on the North American continent?

However, Hollywood is pretty good at producing movies that offend different nationalities and cultures.  As we all know who really runs Hollywood, one documentary that shows some of the most offensive films based on the Muslim world is called ‘Reel Bad Arabs: How Hollywood Vilifies a People’ by Dr. Jack Shaheen.

Hollywood and their useful idiot celebrities are propagandists who support the war in Ukraine, the Covid-19 vaccines and other globalist agendas including the concept of eating bugs as recommended by the World Economic Forum.  The bottom line is that Hollywood and their useful idiot celebrities are a bunch of clowns that should not be taken seriously, so why do people around the world idolize these people in the first place is beyond me.

On Western Support for Nazism

The Ever Widening War